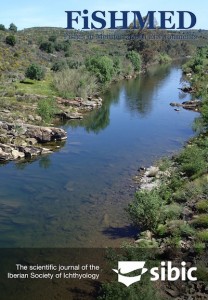 Abstract : The taxonomy of critically endangered and geographically isolated populations of the Spotted Galaxias (Galaxias truttaceus) from either side of the Australian continent has only recently been resolved with those in Mediterranean-climatic Western Australia considered to be an evolutionary significant unit. Ontogenetic changes in gross morphology, pigmentation, fins and fin folds of wild-caught Galaxias truttaceus from south-western Australia are described between post-hatch and juvenile life stage. Newly hatched larvae are 5.3 mm in body length (BL), elongate, lightly pigmented, have well-developed eyes and mouth, a large yolk sac and straight gut. A medial unpaired fin fold extends ventro-distally from myosepta 5–8, around the notochord and then dorso-proximally to myosepta 7–12. The commencement and completion of fin development is C, D, A → P → V, with the full complement of adult fin meristics present by 27 mm BL. The juvenile life stage is reached at c 34 mm BL when pigmentation and body shape are consistent with those of adult stages. Larval G. truttaceus can be discriminated from other sympatric congenerics on the basis of pigmentation and the position of the dorsal fin origin proximal to that of the anal fin, and from other sympatric species that are less-elongate and/or have fewer myomeres and are more heavily pigmented. A distinct ontogenetic shift in diet from aquatic to terrestrial prey occurs at transition to juvenile life stage, and presumably reflects both a change in habitat (from lentic to lotic) and the attainment of adult morphology.

Abstract : Margaret River and the Cape to Cape region in the extreme south-western tip of Australia are located between Cape Naturaliste in the north and Cape Leeuwin in the south and encompass all intervening catchments that drain westward to the Indian Ocean. The region has a Mediterranean climate and houses 13 native, obligate freshwater macrofauna species (i.e. fishes, decapod crustaceans and a bivalve mollusc), four of which are listed as threatened under State and/or Commonwealth legislation. The most imperiled species are the Margaret River Burrowing Crayfish (Engaewa pseudoreducta) and Hairy Marron (Cherax tenuimanus), both of which are endemic to the Margaret River catchment and listed as critically endangered (also by the IUCN), and Balston’s Pygmy Perch (Nannatherina balstoni) which is vulnerable. The region also houses several fishes that may represent new, endemic taxa based on preliminary molecular evidence. Freshwater ecosystems in the region face numerous threats including global climate change, a growing human population, introduced species, destructive land uses, riparian degradation, water abstraction, declining environmental flows, instream barriers, and fire. Here we review the current knowledge of the considerable aquatic biodiversity values of the region to provide a contemporary checklist, and to highlight actions that may be considered to protect these values in the face of both current and future conservation threats.

Genetic characterization of the Zebra mussel and the Asian clam invasion in...

Historical citizen science to understand and predict climate-driven trout d...
Cookies allow us to offer our services. By using our services, you agree to our use of cookies.I agree Read more...
Scroll to top