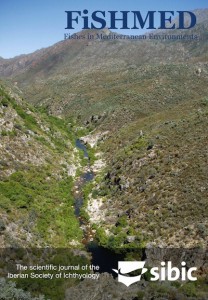 Disruption of salinity regimes in Mediterranean coastal wetlands and its impact on the coexistence of an endangered and an invasive fish
Miguel Clavero, Nati Franch, Quim Pou-Rovira and Josep M. Queral

Abstract – Mediterranean coastal wetlands have been extensively eliminated and degraded by human activities. Salinity regimes are one of the main abiotic factors structuring biological communities in coastal wetlands and can be disrupted outflows from irrigated fields, especially through dilution. Here, we analyse patterns in salinity regimes as well as their temporal trends in coastal lagoons of the Ebro Delta, focusing on the impacts of rice farming. We then analyse the relationships between salinity regimes and the populations of two fish species, the Iberian toothcarp (Aphanius iberus) and the Eastern mosquitofish (Gambusia holbrooki). The former is a globally threatened cyprinodontid endemic to Spain and its decline has been linked to the impacts of mosquitofish.
The influence of rice farming in the Ebro Delta has disrupted the salinity regimes of its coastal lagoons, most of which have winter salinity peaks and low values during summer due to irrigation drainage from inundated rice paddies. Active management of these outflows has favoured increases of summer salinity in some lagoons between years 2001 and 2009, but during the same period summer salinity values have decreased in other lagoons. Between years 2005 and 2009 we sampled fish 55 times in the autumn, within 16 sites, capturing more than 10,000 fish. We related fish captures to the seasonal variation in water salinity. Toothcarp were more abundant in sites with higher summer salinities, i.e. with little influence of drainage effluent from rice fields. Mosquitofish tended to be less abundant when winter conductivities were high, suggesting that the maximum salinity levels during winter act as a filter for the species.
The agriculture-induced drop in salinity during summer seems to allow mosquitofish to occupy coastal lagoons. We discuss the interactions of rice culture with natural wetlands as well as the management implications for the conservation of the Iberian toothcarp.

Citation : Clavero M, Franch N, Pou-Rovira Q, Queral JM (2016) Disruption of salinity regimes in Mediterranean coastal wetlands and its impact on the coexistence of an endangered and an invasive fish. FiSHMED Fishes in Mediterranean Environments 2016.001:20p.

Abstract – The mummichog Fundulus heteroclitus, a cyprinodontiform species native to the Atlantic coast of North America, was apparently introduced to southern Iberian Peninsula in the early 1970s, if not earlier. Until now, the Barbate marshes constituted the southern limit of the species in the Iberian Peninsula. However, a fish mortality event promoted by an anoxia episode in the Cachón River (July 31st-August 4th 2016) revealed a southward expansion of the species from its known southern limit. It is not known whether the mummichog has already occupied other potentially suitable habitats south to the Cachón River, but this should be of concern, since it could threaten the unique populations of some native fish species in the area.

The influence of parasites in the population status of the European eel, Anguilla anguilla L.
Aurélia Saraiva, André Pereira

Citation : Saraiva A, Pereira A (2016) The influence of parasites in the population status of the European eel, Anguilla anguilla L. FiSHMED Fishes in Mediterranean Environments 2016.003:4p.

Life cycle and structure of a population of Batrachoides surinamensis in a mangrove swamp, Maranhão, Brazil
Maria do Socorro Saraiva Pinheiro, Roberto Goitein

Update of the Ichthyologic Biodiversity Inventory in Spain