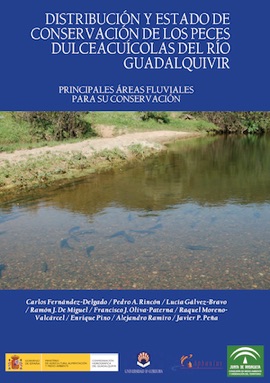 Five years of work, thousand river sections studied and traveled 60,000 km, giving an idea of the effort to obtain the information in this book.

Lampreys typically occurs in Paris with different life cycles: one anadromous parasite and a non-resident freshwater parasite. For decades, scientists have tried to understand if these “species” are even different taxonomic entity or a result of phenotypic plasticity associated with a single species, ie two ecotypes. Researchers at the University of Lisbon and the University of Évora, in collaboration with colleagues from the University of Basel, found a strong genetic differentiation among sympatric European river lamprey lampreys and brook lamprey, providing the first genetic evidence for taxonomic validation of these two European species of lamprey. This work, published in the journal Current Biology, shows the power of massive sequencing technologies to solve problems in the long discussed in the scientific community.

The Itagra CT  and the University of Valladolid have been organized for September 17-20 VI Workshop fishways: Design, Construction and Assessment.

This 30 hour course is aimed at engineers, technicians or managers related to the design or management of hydraulic, civil and environmental works, which aims to train in the evaluation and design of fish passes from a global and integrative perspective: hydraulic design , evaluation of solutions, constructive, biological conditions, environmental impact, etc.

The direction and coordination of the courses run by the partner SIBIC Fco. Javier SANZ RONDA, UD Hydraulics and Hydrology Department. of Forestry, ETSIIAA of Palencia, Valladolid University.